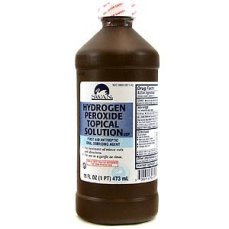 Here is a very thorough review of advantages of Peroxide.

Have you received an email that begins…

“My husband has been in the medical field for over 36 years.  And most doctors don’t tell you about peroxide.”

Well, I have and was compelled to research fact/fiction as that brown bottle has been under my sink ever since I moved out of Mom’s house and took the spare bottle with me.
The photo above is of a really old bottle and one just purchased ($.89/quart). Hydrogen Peroxide does disintegrate with light–hence the brown bottle–and age; the small bottle will be disposed of as it sports a Snyder Drug Store label–Snyder’s has been out of biz for over 10 years. The great news is that the contents can be poured down the drain; HP is water and oxygen and decomposes into it’s parts. So pour away, rinse and recycle bottle. I never know what to do with Clorox/bleach bottles; can diluted/rinsed contents be poured down the drain? Duh, guess so; just realized diluted bleach goes thru the washing machine and into sewer/septic. Whew, another dilemma that won’t keep me awake at night!

Essentially, the email touts peroxide over ‘Clorox’.  (FYI:  Clorox is a brand name for a company who makes both ‘Clorox’ and Hydrogen Peroxide.)  Many of the claims in the email are true and some aren’t so  much.  Review the email for yourself at snopes.

Here are some high points of what I learned:

Clorox:  a bleach/disinfectant made from sodium hypoclorite, basically liquid chlorine, that is extremely corrosive and will eat away fabric, skin, metal, etc., in its undiluted form.

Hydrogen Peroxide is also a bleach/disinfectant whose chemical composition is oxygen and water.  Both of these ingredients are non-toxic and can be washed away with water with no environmental concerns.  One caveat:  HP is a bleach and will bleach anything it contacts.  However, the common concentration of 3% available in drug stores, is mild enough to use for mouth wash and toothpaste.  HP is probably best used in the home as a disinfectant due to it’s safety and odorless composition. And, HP is the preferred hospital disinfectant.

Check out The Many Benefits of Hydrogen Peroxide by Dr. David G Williams. This is just one of many, many websites with similar information but liked this one due to its organization and writing.

I find the garden applications most helpful.  HP (H2OO2) occurs naturally in rainwater and this is why rainwater is more efficient than tap water; H2OO2 provides more oxygen for plants thus promoting growth.

Save to view later

This entry was posted in OPINE. Bookmark the permalink.